This sensor shield for NModule will allow you to make the following sensors :

My favorite node is a combination of a SMD SI7021 for temperature and humidity and a MAX44009 for light: both are very low power and both are precise and reliable.

SCRIPTS ARE IN TEST PHASE NOW SO NOT YET PUBLISHED, PLEASE WAIT a bit :)

Necessary pins to keep on NModule:

To avoid any possibility of shortcuts while I put the shield as close to the NModule as possible to reduce thickness, I put some electric tape on the full surface of the NModule. 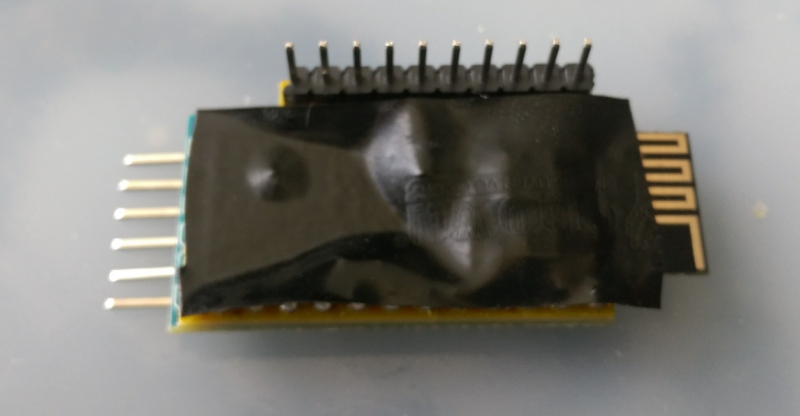 It's ugly but it's efficient :D 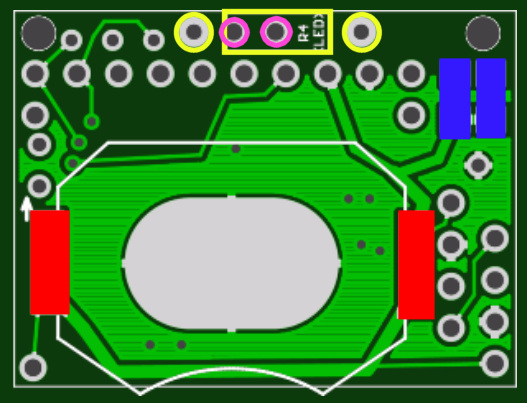 Soldered on the red color pads. It will not run without capacitors to backup the battery during high loads, and I only had space for SMD capacitors. So if you're allergic to SMD, use the through-hole battery holder & capacitor on the NModule board.

After holder is in place, solder the reserve capacitor(s)

You can put some SMD (1206) ceramic capacitors or an electrolytic through hole capacitor.

SMD capacitors are on the blue pads. You should have at least 100µF but the closer you are to 200uF the better it is. I suggest to use ceramic capacitors of 100µF each, if possible X7R, with the voltage bias with 2*100uF it gives me a real capacity of 130µF so there's not much margin. You can find up to 220uF in 1206 size so in that case one is enough.

Through hole capacitor in pink color. I've been happy with 10V / 220uF capacitors so I advise you to use the same. Using a low voltage rating means a reduced size and 220uF ensures a good reserve to help the battery during high load.

You have 3 options here:

For the 1st and 2nd choices, you don't need the upper part of the PCB so you can save a bit of sensor space by cutting the top part of the PCB with scissors along the red dashed line. If you are planning to do a door sensor with a reed switch it will also be easier if you cut this extra part.

On most of the NModule shields, green led is A1 pin, red led is A2 pin. These are analog pins but they can also be used as digital pins, just set the pin mode as output and then use digitalWrite.

For this I am using a 3mm Green + Red led with common cathode. It will go in the holes circled in clear blue. Cathode is the longest leg in the middle, and you can't mix between green and red as I put some lines on the board next to green and led texts: short line for green color which has the shortest leg, longer line for red color. I had space for only one resistor (Yellow on the pictures) for both colors, so you will have to chose a value that will fit both colors, 330 or 220 Ohms are ok.

In case you find more convenient to have reset button on the front, you can unsolder the reset button on your ProMini and solder it in the front, in the purple color footprint. If you are not using the cheap "the simple" ProMinis from AliExpress or Ebay you might have a different switch, in that case you can buy them for a very low price, just over 1$ for 100 on AliExpress.

This type of reed switch has pins for both states: by connecting each of them to the interrupt pins and enabling the interrupt only on the unconnected pin, we can achieve extremely low power, and we don't need any extra resistors, the pullup resistors of the atmega328 are enough.

Just connect the reed switch as illustrated on the picture above and you are good to go, you will just need to uncomment the #define REED_NONC line in the script to use it.

To enable easier placement of the reed switch on the side of the board, you can solder the NModule connector without the GND, D2 and D3 pins (circled in blue on the picture above). Then use the pins of the reed switch to connect NModule and sensor shield.

Connect Reed switch between GND and D3 (red color). Then you can use either an SMD resistor (yellow color, marked R3) or a through hole resistor (pink color, holes marked R3')

To enable easier placement of the reed switch on the side of the board, you can solder the NModule connector without the GND and D3 pins (circled in blue on the picture above). Then use the pins of the reed switch to connect NModule and sensor shield. 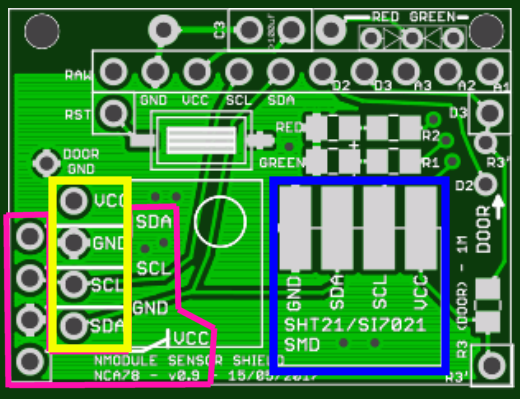 Blue color. This is the SMD version of the breakoutboard for SHT21/SI7021. I strongly advise you to buy that version, even if it's a bit more expensive, because it's much more simple than the other breakout boards and there's no voltage regulator meaning no wasted power. Of course if you're not running on battery and your VCC is 5V and not 3.3V or lower, do not use this, use the "classic" breakout board !

No special instructions are needed here, if you have already soldered the radio on NModule it's the same process, but easier: the pads are wider and it is really easy :)

These are in yellow and pink color. I used what I think are the 2 most common I2C pin orders so you should be able to use most of the temp/hum/light/UV I2C sensors out there. Just check the breakout boards you are orderings to make sure they match one of these 2 pin orders. Some breakout boards have extra pins for address selection or interrupt, but the main pins for power and I2C communication are enough to use them.

If you have I2C sensors that cannot fit that board, don't hesitate to share in the comment and I might add support in a next revision.

I am working on some 3D printed enclosures for the full sensors, I'm not ultra talented as a designer :D but at least it will provide a good base for others to improve. I'm waiting for the last release of PCB from PCB house to arrive to make some final version. 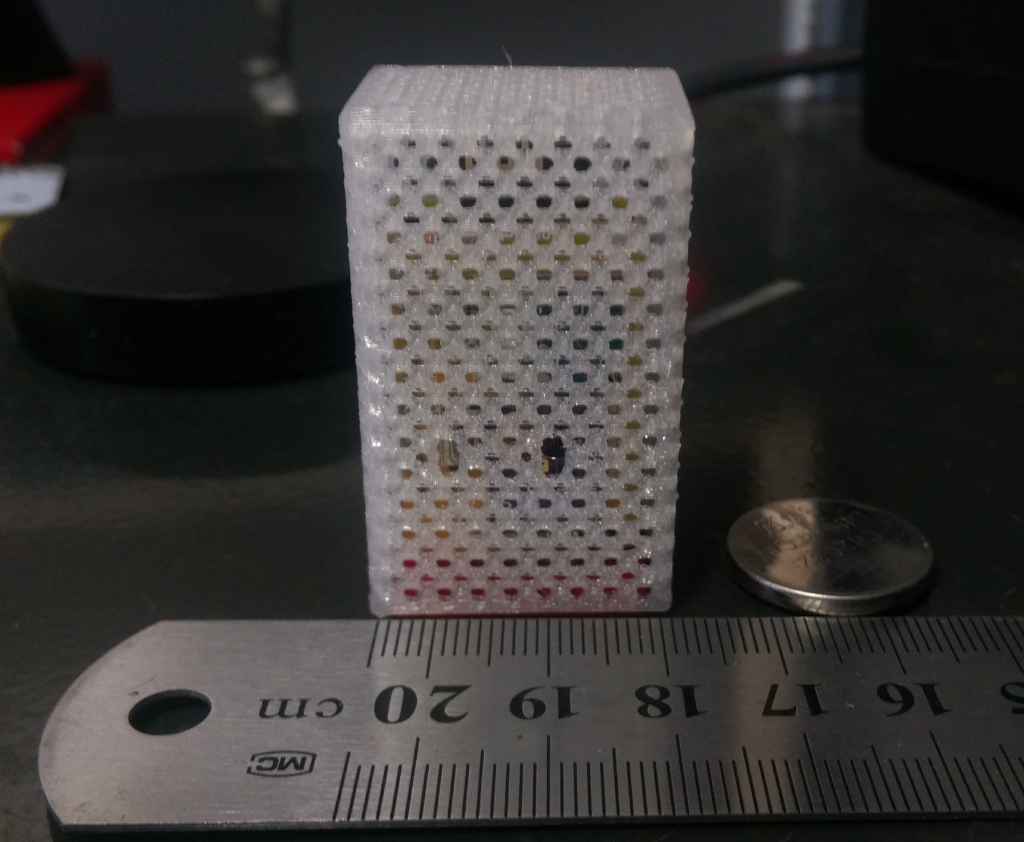